Data transmission by light is the future: discover SLUX

The demand for ultra-fast communication is increasingly pushing radiofrequencies to the limit and a technological revolution is just around the corner. What if data could be transmitted at the speed of light by light waves? Communicating by light is not black magic anymore, and the young inventor Alessandro Pasquali has made incredible achievements in the field of light communication technology, creating its own innovative startup SLUX.

Read the whole article to discover SLUX and why light communication technology is the future.

Li-Fi (or Light Fidelity) is an innovative wireless technology that uses light waves instead of radio waves to transmit data. It is a form of bidirectional, networked, mobile, and high-speed wireless communications closely reminiscent of Wireless Fidelity (WiFi). Compared to WiFi, the advantage here is that communication uses visible light instead of the increasingly congested radio frequency spectrum.
Just like current technologies require antennas to transmit and receive radiofrequency signals, light communication requires a source and a receiver of light waves. In most cases the source of light waves can be a simple low power LED but there are applications that employ other sources such as OLED, neon tubes, voltaic arcs and other plasma sources or even altered natural light. Any data or information can be encoded into the light signal, using different systems and techniques. Most of our systems currently work with light beams pulsed with specific modulations. The light signal is generated and can travel freely both indoor or outdoor, allowing the receiver device to catch it and decode the information.

However, this way of sending data is not new in an absolute sense. The television remote control that we all have at home uses an invisible infrared light to send signals. The concept has therefore existed for some time, but now thanks to LED technology, IoT devices and smart lighting, it has been possible to extend it to new lighting systems and with far more efficient data trasmissions.
But why Li-Fi has the potential to be better than Wi-Fi? Let's have a look at the most important advantages:

Light communication can deliver speeds of multiple Gbps. This means we can open unprecedented chances for technology and services.

Light communication signals can be contained, delimited and secured within a physical area. This provides it with an intrinsic safety feature.

Light communication does not raise any health safety concern. Visible light does not carry any kind of hazard to living beings or devices.

SLUX: the discovery of Alessandro Pasquali

The state of the art of light communication technology has still many limitations and flaws, but the aim of SLUX is to make it viable today.
Founded in 2015 in Lugano, Switzerland, by the young inventor Alessandro Pasquali, the newborn startup has been developing, engineering and deploying light communication solutions based on his designs. While the startup is the exclusive holder of Alessandro's patents and technology, he maintains his status as an independent inventor, granting his know-how to Slux on an exclusive basis.
Alessandro showed a keen scientific curiosity from an early age. He has been studying this phenomenon for more than ten years, experimenting with LED data transfer since the age of 16, with the clear ambition of using light to transmit data. Inspired by the work of Italian inventor Guglielmo Marconi, Alessandro aims to continue his effort to expand the conquest of the frequencies in the electromagnetic spectrum to include visible light.
He successfully reached a big goal a few years ago in connecting England with France over a total distance of 33 kilometres using light communication, an achievement which represents a record and marks a milestone in the development of light communication technology.

The disruptiveness of his achievements has caused incredulity among many so-called experts in the field. There have been cases of engineers from leading Li-Fi companies dismissing Slux’s technology as black magic. Luckily, magic has nothing to do with the extraordinary results achieved by visible light transmission solutions.
Surprisingly enough, Alessandro has a background in chemistry and photoreactivity, rather than electronics and telecommunications. This unconventional approach allowed him to think and conceive light in a broader sense, without reducing its definition to a fraction of the electromagnetic spectrum. Many of his inventions and patents in fact exploit properties and behaviours of visible light that are normally ignored or considered irrelevant by engineers.

Light communication have the big potential of improving many fields:

SLUX's photonics technology represents an innovative system to protect and restrict access to rooms, control areas and vaults.
The basic principle is that unique information (id, access rights) can be physically encrypted in materials at the level of photons.
SLUX's photonic key is a solid and robust device completely immune to electromagnetic disturbances, highly resistant to tampering and unauthorised duplication. It can be used as a form of strong authentication in association with a biometric component (2FA).

Light communication technology can make full use of the existing installed equipment to unlock new possibilities in terms of comfort and safety. Enabling data transmission through lighting can transform an ordinary house into a real smart home. Devices such as televisions, computers, tablets but also household appliances such as fridges, vacuums and washing machines will be connected to constitute a local Internet of Things that will benefit from the great bandwidth, allowing for an unprecedented level of smart services.

Radio waves and GPS signals suffer heavy degradation in underwater environments. Light, on the other hand, can travel through water and other fluids without particular problems, even at great depths. SLUX's expertise allows to offer a wide range of solutions for stable and robust underwater communications that require security and high bandwidth. Such solutions are based on photons produced by electric arcs or sophisticated LED systems improved to withstand the most extreme conditions.

The medical sector is one of the most sensitive in terms of data transmission solutions, due to its low tolerance for errors and disturbances. Due to the limited interference compared to radio waves, light communication is a suitable alternative for all environments that are sensitive to electromagnetic fields. SLUX's photonics technology makes previously unthinkable solutions possible for all medical and life science applications, such as real-time diagnostics and interconnection of devices, equipment and machines.

The speed and characteristics of a data network based on light waves can open up enormous possibilities for localisation and autonomous driving systems, on the road and in the air. In a few years, we may not only have self-driving cars, but also passenger planes that can take off and land autonomously and in complete safety.
This photonics technology let overcome the constraints and limitations of GPS to unlock autonomous driving for vehicles and passenger aircraft.

Virtual reality is on its way while augmented reality (AR) is already deployed in many sectors. This type of user experience requires high bandwidth, especially when used by several people at the same time. A wireless connection via light can solve this by offering greater speeds and bandwidths. Indeed, light connection technology is able to support the enormous data load required to create complex augmented reality systems that can be used by a large number of users.

Light communication is the ideal solution for IT infrastructures in businesses and enterprises. The intrinsic security of light transmission represents a breakthrough in the architecture of intruder-proof IT systems. Wireless solutions often present risks of interference and security of connections. The dream of moving to a completely wireless but at the same time extremely secure corporate infrastructure is finally achievable with SLUX's photonics technology.

With almost 50 years of experience, Hemargroup has been the electronic production partner of international companies and innovative startups, ready to shake the world. As a partner to startups, we have developed expertise and obtained strategic certifications, becoming an exceptional support for their growth.

We are proud to be ambassador of Swiss-Made at an international level, guaranteeing precision and quality, as well as complete traceability of every single component and product. As a leader in the engineering and manufacturing of electronic devices, we help you overcome the challenges of designing, manufacturing and launching a new electronic product or service to the market. We are able to offer a 360° solution, from the development of the idea to its launch on the market. Our skills go far beyond consulting: engineering, prototyping, testing, introduction of new products, patent and certification support (CE, etc.), mass production, end-to-end product life cycle support, marketing. Our startup services are always aimed at mass production, substantially reducing time to market, errors and improving the cost competitiveness of the product, following the Design for Excellence principle.

Are you a startup and do you need a contract manufacturing and enginerring partner? Leveraging the latest technologies and independently from the life cycle of your product, we can support you to succeed. Our engineering, electronics manufacturing and logistics management services are cross-industry excellence and industry 5.0 ready. In addition, with a selected rose of partners in incubation and acceleration programs, we are equipped to support your project from end-to-end, successfully bringing it to market in record times enhancing your chances of success.

If you want to know more or we can help you with your idea, contact us now: 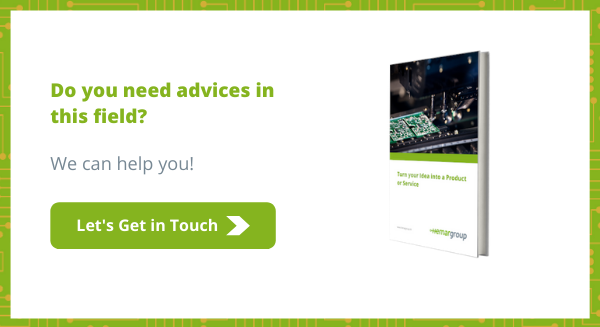